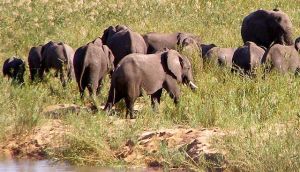 Elephants At Zakouma National Park in SE Chad,
the tragic sight of many Elephant deaths by poachers.

And on this day, 66 bad guys have bit the dust!

As has sadly been posted on this Blog several times,  elephant and rhino poaching in Africa is out of control and increasing at an outrageous and alarming  rate.

These beautiful animals and others are continually being murdered and/or maimed for their body parts all over Africa and also India.

The long tentacles of the smuggling industry have now become Global,  as increasingly desperate people will do nearly anything to provide an income for their starving families.

But even as the numbers of those who choose this life of animal crime increases exponentially, so do those who intend to stop them.

Yesterday,  Interpol , a global group dedicated to among other things, ending the widespread wildlife poaching and smuggling industry in Africa, announced that with the group’s recent successful campaign known as,   Project Wendi ,  they have over the past few months,  arrested 66 Ivory Smugglers in Africa.

The massive financial rewards for all involved in this despicable business, makes them willing to risk prison or death, for the money that awaits them.

Although this recent Project by Interpol may not stop the insanity in Africa, it is a beginning and each one arrested slows down the process, just a bit.

And another animal may live a day longer.