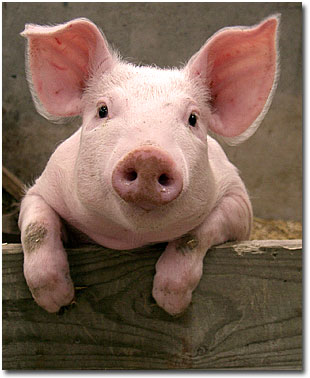 On our news this morning, came a story that I could not wait to share with all of you.

It could not wait until ” Good News”  Sunday, so now, I must find,  hopefully,  another one for that day!

This story concerns a video of extreme animal abuse,  that became a public video and exposed a company and their supplier for the horrific  treatment of animals.

Tyson Foods really had no choice, once they had been exposed and the supplier caught in this heinous behavior, but to end their relationship with them.

Personally, I believe that if they had not been caught  “on film,”  they more than likely would still be doing business with them.

As the story explained, Tyson Foods has  “dropped”  an Oklahoma Supplier for extreme cruelty to the pigs it slaughters.

There is something so insane about that sentence.

The heroes in this story are a group called Mercy For Animals.

Here is a link to their web site, but please be forewarned some places on the site are quite gruesome:
Mercy For Animals

But how on Earth can we stop this horror for animals, if people don’t know what is being done?

Only go to their site,  if you can bear seeing animals suffering horribly and avoid the Walmart section.

Here is my point for bringing this to your attention.

If you do still eat meat, do you have any idea what that very process and decision has on millions of animals all over the world?

You must understand that huge companies like Tyson and Walmart have only one thing in mind when they do business and it is MONEY!

All that they care about is the bottom line, who will do it the cheapest.

The details are none of their concern, until like now, when they are caught.

Thank God for this group and may I add, that they are very brave, for capturing this on film because otherwise, the very high-priced lawyers for these companies could deny, deny, deny, in court and WIN!

There was another very strongly warned video that came up during my search, but I was afraid to click on it and did not wish to share it with you, what is already here, is probably more than many of you will ever want to see or know.

Although the story explains the reason for Tyson’s decision, which I might add was not enough, it could have, should have been, much more detailed and had so much more about this behavior and how wide-spread it is in the Food Industry!

Every decent, moral, conscionable company within the vital Food Industry, who learns of this kind of behavior, or treatment, should with no hesitation,  rid themselves of the demons that now purvey it.

One last thought, I have always loved all pigs, and would have them in our yard, if legally allowed~

Here is the story:   Tyson To Drop Oklahoma Hog Supplier After Abuse Video

This was just shared with me,   it will break your heart, it broke mine:

We must stop this cruel cycle.  Please make your feelings known!