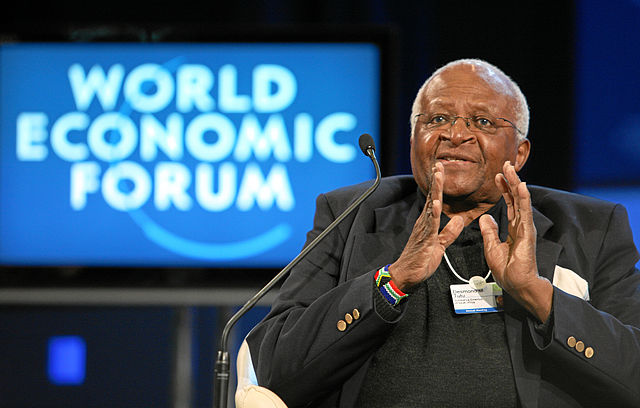 “If you are neutral in situations of injustice, you have chosen the side of the oppressor”

After the unshakeable darkness of the Rhino post yesterday,  this morning a saved story on my desktop has to come to rescue me from the mire.

These terrible stories take a huge personal toll on me and writing them often takes days to recover from.

So, it is a relief to be writing a feel good  story, even if it is not Sunday, it is necessary.

This is about a man for whom I have the highest regard,  who speaks up when others remain silent on not so safe issues for such an esteemed member of the Clergy.

Desmond Tutu’s  support of gay rights and other main stream issues, have likely sealed his fate and any possibility of him ever being considered for Pope, which I am sure bothers him little.

Is it any wonder that Tutu is such a cherished man, like Gandhi, Mandela and the Dalai Lama, he practices what he preaches.

These men share a common bond, along with their Nobel Peace Prizes, (Gandhi was never given this Honor which seems unconscionable) they are/were devoted to peace and kindness.

Like the others, Archbishop Desmond Tutu lives what he believes in, kindness and compassion for all, his public stances on important social issues has given them a stage for the world to draw and learn from.

Now, it  seems that he has turned his usual warm glow into written comments,  speaking up for our world’s animals for the first time.

His supportive and inspiring words were written as a forward for the new book:  Global Guide to Animal Protection.

I am overjoyed with his comments and believe his words to be as usual, well thought out and wise.

Tutu’s words will bring a whole new audience to a critical Global Issue, the treatment of animals.

Prior to this recent work by Tutu, the last ones  so high on my most respected and admired list to lend their powerful support to the plight of our world’s animals, were Gandhi and the Dalai Lama.

Bravo Mr. Tutu, you have no idea how much your words mean to those of us  like you, who wish to see the lives of all animals made safer, better,  longer.

The torch has been passed.

A few places to learn more about this:

Press Release: We Must Fight Injustice to Animals