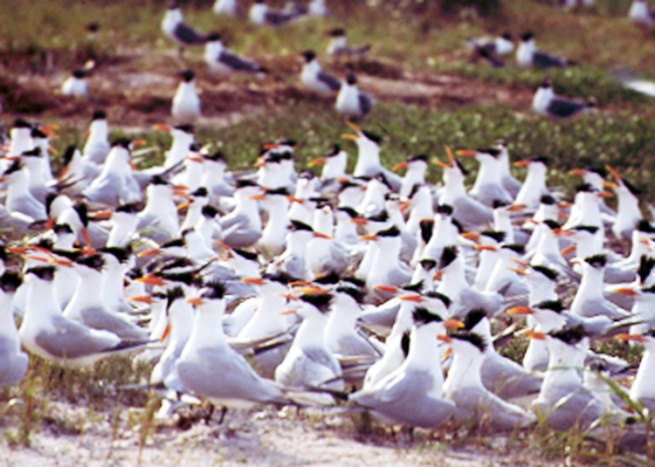 When this came on our Noon News yesterday, at first I thought that it must be a joke, but as it turned out, it was quite the opposite.

A Florida Wildlife Refuge on the Gulf Coast near Tampa, called Passage Key, with a resident population of rare Native birds like Royal Terns, is being disturbed by Nudists.

The Nudists are allowed to wade in the water offshore, but are forbidden to go onto the Beach, where the Birds are Nesting.

There are signs and the area is patrolled.

This Federally protected habitat is off-limits to the public, but a seemingly ignorant and determined group of Nudists have been going ashore and the birds who are not used to having humans on their Nesting Beach area, are flying off.

This is not good.

Anyone who knows anything about wildlife, knows that when they are disturbed and their habitats are invaded,  or their daily eating routines are interfered with, they may suffer serious consequences from it.

A hungry animal that is frightened away from its food source or nest, may or may not return, before it is too late.

A few months ago, in a similar kind of Island Environment on the Atlantic Coast, also with a group of nesting rare Terns, several  dogs were allowed to run loose on the Island and they did irreparable harm to all that they encountered.

By the time it was over, the Nests, the Chicks and the Terns were all gone!

Complete, absolute and total destruction, for what?

It would be extremely sad to see a repeat of this tragedy on the West Coast.

Newly reformed island is for the birds, not nudists, according to feds