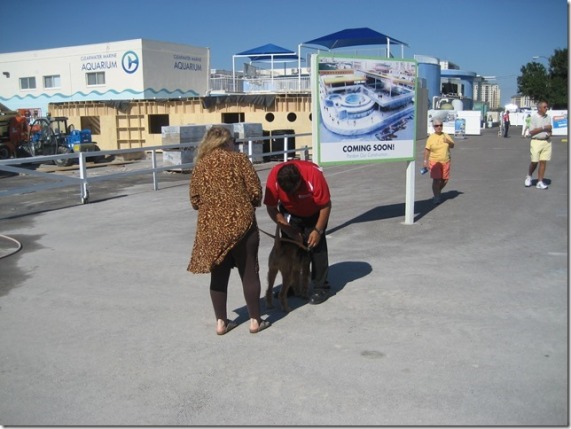 Breanna and I have a meet and greet with a friendly staff member at the Clearwater Marine Aquarium.

All pictures were taken at the Clearwater Marine Aquarium last October, 2013 by Walkingfox.

If you have been here for a bit, you may remember the story about  Winter, the rescued Dolphin  whose tail was severely damaged and was eventually rehabilitated and fitted with a new one.

Winter has been the star of the Clearwater Marine Aquarium where she has lived  since her rescue and story were put on film and all the world fell in love with her.

Now this amazing place of rescue and rehabilitation,  is putting its money where its heart is and there will no longer be any Dolphin Shows there.

As CEO David Yates so eloquently put it:

” We don’t rescue them so we can show them to guests. Our goal is to release them back into the wild.”

After Walkingfox was released from the Tampa VA Hospital last October, we decided to go and spend some time, the next day, looking around and admiring the nearby Clearwater Aquarium facility.

It truly was a wonderful place to see, even though most of it was closed for filming that day.

We already knew that a sequel was being filmed while we were there, so public viewing was understandably just a bit curtailed, but we were just happy to be able to be at the very place where it all happened.

Winter has a new friend named Hope, who was also rescued and the film is about their new life together, we were told.

The planned extravagant and quite expensive new facility, has been ditched and the focus will now and in the future, be entirely on rehabilitation and eventual release of rescued sea wildlife.

What more could anyone ask of this  awesome group of loving and devoted people who gave the world such a joyous film called “Dolphin Tale ” detailing  the amazing life and history of Winter’s journey.

Now next week, the long-awaited sequel Dolphin Tale 2 will  finally be released on September 12, reuniting once more the original cast.

If you are a sucker for inspiring and sweet stories, please rent the first and then go see the second.

Just be sure to bring a big box of Kleenex.

This place is now doing it right.

Dolphin Tale’s Aquarium Says NO To ‘Show Must Go On’

12 thoughts on “Doing It Right”