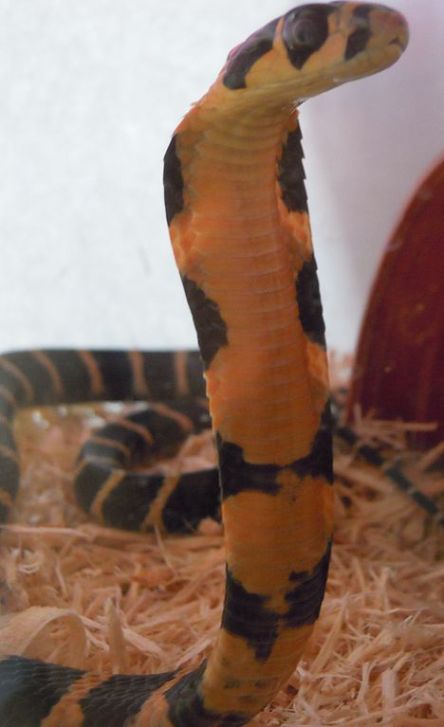 After living in so many places before coming to Florida in 2004, it was only a matter a time before this would happen.

And it did.
Within a few months of moving here, there it was one day, curled up on the black mat at our back door, waiting for me.
As it turned out, it was harmless, to humans, at least, it was just a Black Racer, which is a very common non poisonous Florida Snake.
Did that make me any less terrified.
Absolutely not!

But, after a few years, it has all become nearly routine and the fear gets a little less with each random encounter.
That is, until now.
A few days ago in Orlando, a man who apparently has quite a few poisonous creatures living in his house, lost one of them.
It just ran away.

But he did not, as required, report it immediately!

And after seeing the living conditions at this place, I do not blame the snake.
The escape of this snake, has been shown ad nauseum on all of our local channels.
These animals are housed in cages so small, they can barely turn around, let alone get any exercise.
My thinking is, that the snake left to find a better home!

But here is the scariest part, at least for those poor souls who live in close proximity to this man, this was not just any ordinary snake.
This was an 8 foot long King Cobra, whose venom they are saying, can take down an elephant or 200 humans.
Yes, 200!

This man, who has a state license to keep these poisonous animals, has a history of “oops” accidents and negligent behaviour concerning his charges.
So, you may ask, why does Florida Fish and Wildlife still allow him to have them?
That is the question being asked by his neighbors, who have started a petition and already have 200 signatures.
A previous King Cobra got loose from this man and it turned up in one of his neighbor’s garages, who killed it.

This is a very sad situation for the animals who have no say in any of it.
The man is a “reality star” the news claims and makes his living with these caged animals.
But, each time I see him on the news, he is putting a snake into a garbage can.
He does not look like someone who is terribly fond of them, just someone who has found a way to profit from them.

In India this snake is protected.

Schools on this man’s block have kept the children inside all week and moved those in the bungalows, into the main building for safety concerns for the children.
FWC says it is likely the snake, who they and the man, both say is shy, will avoid humans, but how long can you keep these children inside?
This is not fair to them, or the animals that this man is keeping.

It is at the very least, a sad, ugly situation.
The last news story I watched this morning, gave a link to a web site, where you can see just who and where poisonous animals are being kept in Florida.
If even one child here is killed by a poisonous animal who is being kept for profit or other, there will be “hell to pay.”
Even one death is one too many.

Now, this is only my opinion but, private individuals have no business, no right, to keep poisonous animals in their homes, considering the tremendous risks that could result from an errant escape, such as this one.

It is beyond time to stop this, before a tragedy occurs.
So, those of you out there in Florida who think this is a good way to make a living, I say:
You need to find another way to earn your living, one that does not put animals/wildlife or your neighbors and their children in jeopardy.

Please, go get a real job because this “King has left the building.”

Escaped king cobra on the loose in Orlando

18 thoughts on “This King has left the building!”