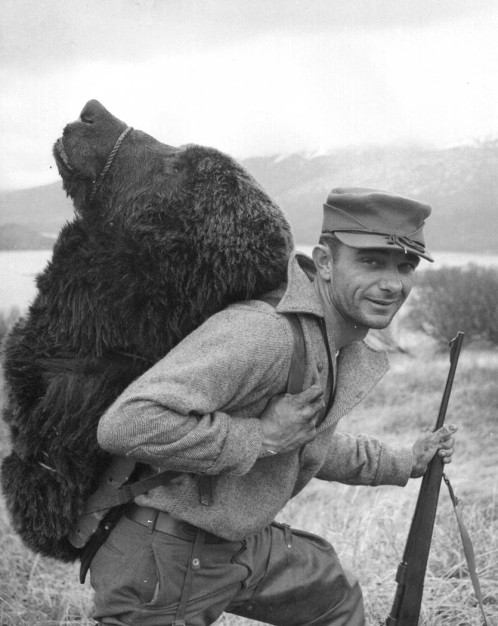 Why is this man smiling?
Picture credit: William A. Troyer – US Fish and Wildlife Service
I apologize for this brutal picture, but it explains my rage.

Yes, sorry, two in one morning, both of them  were in my email and neither could be ignored.

This story is about a subject that pains me deeply to relay.

I can still hear the words of my first Anthropology Professor many years ago saying that:

“99% of all species of all animals, will, or have already, disappeared from the Earth.”

I NEVER got over that very off-handed, complacent, nearly matter of fact, comment.

It did not seem like he was all that terribly concerned.

But, then, why should he have been, few seem to be any more.

It almost seems like we Humans, have become hardened against, or desensitized to this alarming state of affairs,  in the Animal Kingdom.

It is so much easier to pick up a gun and shoot something, than it is to put a seed in the ground and wait for it to grow!

Decimation is a horrifying word.

In the past I have used it many times when writing about the Native Americans.

They too were decimated in many places all over this country by two  other ugly words: Manifest Destiny.

But unlike the Native people, animals cannot be assimilated!

Hello people, we are losing animals as fast as they can reproduce these days.

Look around your own neighborhoods.

Have you, like me, watched over the years,  as fewer and fewer of certain animals have disappeared right in your own yard?

It isn’t for just one reason, or in one country, it’s everybody, everywhere, killing everything.

We either kill them directly, or by destroying their Habitats, so that they die anyway.

What ever will we all do, when they are all gone?

This Planet will be an ugly place with no animals.

As Gandhi always said,  ” A Nation will be judged by the way it treats its animals.”

Well, in the end, which may be nearer than many may suspect, so will this Planet.

Don’t think we can all get on a shuttle and head for Mars or ???

This is it people.

When we have killed them all, for what ever reason, that’s it.

The answer is right in front of us, but few want to accept it.

The answer is not eating animals anymore.

And yes to the ” Happy  Man ”   in the picture above, hunting them either.

Sure, for some, for many, this is a tough pill to swallow.

But dear Readers, what else can we do?

Millions of people all over the world do without meat every day and are quite healthy.

In some of  the poorer Countries, like for instance, Burma, or Myanmar, I was once told by a resident in an interview, that having a chicken for dinner,  is a once a month luxury.

Of course this idea will never sell in states like Texas, where their favorite saying on signs all over the state:

But for the other millions who know change must be made and very soon.

Couldn’t we all at least try not eating any animals, for what ever reason each of us as individuals may choose?

If we do not, and soon, they will be GONE!

Earth lost 50% of its wildlife in the past 40 years, says WWF

Shock report: World has lost 50% of its wildlife in just 40 years